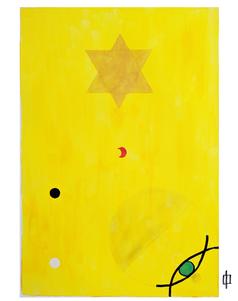 Jonah and the Whale in the Yellow Sea (see)

that was the first seed of Mind,

of being in non-being

in the heart's thought".

I feel like paintings are like dreams, the smallest elements are a peephole into an infinite amount of meanings. Even a simple dream, or a painting clean of details like the one above can never be fully interpreted. However, paintings like dreams keep on developing in the imaginary and the unconscious through metaphors and analogies. And, as time moves on, more meanings are added to the elements and, at the same time, some meanings may be lost or transformed. Therefore, it is not a surprise that the painting above would never be fully explored in an essay like this one. I can only give a limited general introduction even if it’s my painting.

Even though that painting borrows its name from a myth, more specifically, the myth of Jonah and the Whale, the painting was actually inspired by a real event. I tried to walk away from the friendship with my best friend. I felt that I was not being honest with her because I wanted more than friendship. I knew that it would hurt me immensely if she found romance with another man. Therefore, I tried to escape before that happened. This is where real life and creativity connected.

The myth of Jonah was about an attempt to escape the responsibility of living through a conflict. In a somewhat forced explanation, I told my best friend what my intentions were and what I was going to do: walk away from the friendship. However, as in the myth of Jonah, a storm arose because my friend being very upset, and deeply saddened, refused to end the friendship. Motivated by my love for her, I promised that I would not walk away.

My friend was born in the Far East. The yellow color is dominant in the painting and refers to the Yellow Sea as a metonymy of the Far east. Yellow is the color of luminosity, clear perception but also despair. Jonah tried to escape his call by the sea. The sea in the painting is the sea of perception (see). The conflict expressed in the painting is between what “I did not want to see” and “what I had to look into”. What I did not want to see was an external event: she being with another man. “What I had to look into” was an internal emotional event: my unconscious motivations.

In the painting, we can see the shape of an eye. However, the form is borrowed from a glyph. The original glyph represents “Revati”. “Revati” is one of the mansions of the Moon (Nakshatra) in Vedic astrology. The designer of the glyph, Tara Cochrane, describes the glyph in the following way:

“Revati means "Wealthy" or "To Transcend". As the final nakshatra, it synthesizes and absorbs the mysteries of the previous 26. This knowledge is portrayed here by an all-seeing eye. This symbol also contains two fish, representing the sign of Pisces and the soul's journey after death.”

Interesting that it may show an answer to the conflict of escaping from “what I don’t want to see”. The answer is to transcend the conflict by looking into it through the inner eye, through introspection. It was not just one whale swallowing me. They were two fishes in opposition to each other coming in synch and transporting me back to the situation, to the conflict.

It is also interesting that the definition above also cites wealth. A whale many times is a metaphor for wealth. So here we have a whale eye. In Brazil, the “fat eye” is slang for greed. So, the eye in the painting represents greed (having more than friendship). However, it is that same eye that has to turn back and transcend the situation through the use of inner vision. Therefore, that eye is swimming between greed and transcendence.

The symbol also looks like a crab. The crab is rolling a sun disk, as the sacred scarab of Egypt rolled the morning sun. Interestingly enough the sun's disk is half black as if the Sun had a dark side and/or could manifest in phases like the Moon. Psychologically, that could be the case if we look at the Sun as an archetypical symbol of the Masculine and how the masculine can manifest its phases or “octaves”. The same masculine eye that can look at a woman as an object of desire and greed can look at the same woman as a luminous source of inspiration. The scarab rolls the morning sun up. The crab rolls the midnight sun. One sun generates light. The other sun generates smoke. One sun is enlightenment. The other sun is the wheel of Samsara. One sun is Sisyphus repeating the same mistakes. The other sun is Prometheus who defies the gods by stealing fire and giving it to humanity, an act that enabled progress and civilization. Prometheus was also considered the author of human arts. That reminds me that Freud said that art was a result of the sublimation of libido.

The final position of this painting is upside down when compared to when it was first envisioned. At first, the woman appeared standing. However, in this final version, the woman is diving, plunging. She is not only plunging into the Yellow Sea. She is the Yellow Sea itself. She is not just the object of desire. She is the very medium, she is the world in which the journey between greed and transcendence is happening. Therefore, transcendence manifests as immanence. She is not a limited object anymore. She is the Universe. She is diving in a skewed way avoiding getting burned by the sun, avoiding getting stained, distorted, objectified by the masculine eye.

Her navel is the Blood Moon which has a very masculine connotation carrying Martian colors but remaining feminine. Her navel is also the bitten apple of paradise. That is when Eve had domination of Adam and drove him to eat from the Tree of the knowledge of good and evil (discrimination, how one sees and classifies things in the world). The word navel also reminds me of Naval/Navy/Nave/Nau, all of them related to the word ship, the vehicle Jonah used trying to escape his destiny. A ship floats on the water.

A whale or big fish swallows Jonah and takes him on a submerged journey under the sea, under the “see”. The eye/fish/crab are/is crowned by two disks in the painting. One is a smoky mirror. The other is a hole scratched in the painting taking the onlooker “under what can be seen”.

One of her nipples is white. Her other nipple is black. In my mind, they are representing Eve and Lilith (the demonic first wife of Adam). Two complementary ways in which women can manifest their power. So we have Eve, we have Lilith and we have the bitten apple. Two characters missing, however. Where is the snake and where is Adam?

Where is Adam? Adam is the journeyer, the onlooker trying to find meaning in the painting.

Adam is said to have been the very first alchemist. Jung says:

“As the first man, Adam is the homo maximus, the Anthropos, from whom the macrocosm arose,

or who is the macrocosm. He is not only the prima materia but a universal soul

which is also the soul of all men.”

But, in this painting, desire is the prima mater expressed by a woman plunging into the unknown, the yet unseen. And, what we all have yet to see is unlimited, it’s infinite.