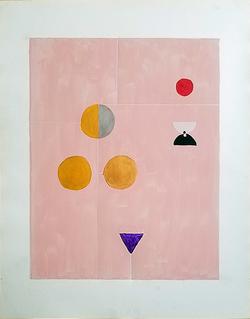 Painting: the seat of virtue

First of the four-painting series “The Four Desires that drive all Human Behaviors.”

Also, first in the ten-painting series “The Seat of Virtue.”

The painting shows a woman at the summit of her sexual maturity contemplating Time. There is a decision to be made: Is the Sun on the horizon the sunset of her youth? Or, is it the empowering dawn of an era of sexual freedom and exploration?

The figure is the depiction of a woman as the Tree of Golden Apples and a violet in the Garden of the Hesperides. The violet is also a lily, a flower in the fields of the well-known Biblical verse (Matthew 6:28). The violet is surrounded and at the base of a hill that may be as well the mount of Jesus’s famous sermon because the woman depicted in the painting may be a sad aging woman but she has much passion in her heart. Her “violet” is a cup overflowing with the wine of life. The violet grows representing the woman’s “violet”, a symbol of her unique sexuality and untamed spirit. That makes her a violet in a field of lilies, a sensual aging woman trying to retrieve the unlived sexuality of her youth.

The woman in the painting was inspired by a real woman with whom I had a momentaneous (and very fortuitous) sexual encounter many years ago. She left a strong and pleasant impression on me. She had more than one reason to feel unhappy with herself. One of them was her physical unattractiveness. At first glance, one could say that she was old, overweight, and ugly. Very fortunately, I met her in circumstances that did not allow my decisions to be stained by rational (and prejudicial) judgment. I was able, therefore, to be blessed with her intimate gifts and her libidinous luminosity.

Her name was Violet. She was blond and her body hair was golden. She had enormous breasts and her soul shone like the sun of a world in which women do not need the approval of any man to feel beautiful and be free. That is why she always comes to my mind in the shape of the Tree of Golden Apples in the Garden of the Hesperides. The gold color is an expression of her blond hair and her value as a free-minded woman and an amazing sexual partner.

In most versions of the myth, the Hesperides are said to be a triad. They are the goddesses of the sunset, daughters of Hesperus (The Evening star). This is the portrait of Violet, a luminous garden in the sunset of life carrying her breasts and her free mind as the tree in the garden of the Hesperides carried golden apples. She celebrates her wisdom and experience while both become increasingly sweeter with aging.

“Consider how the lilies of the field grow: They do not labor or spin. Yet I tell you that not even Solomon in all his glory was adorned like one of these… seek first the kingdom of God and His righteousness, and all these things will be added unto you. Therefore, do not worry about tomorrow, for tomorrow will worry about itself”.

Different people have different gods. I suspect that one of Violet’s gods was the Sun because her skin was tanned and she was soaked with enlightenment. And, well above the astronomical sun, her god was her inner sun. Her inner sun exudes golden light through her mind and her sexual expression making her breasts hang out as golden apples. Her inner garden is the Elysian fields in which Violet herself finds nurturance and blooms and grows and glows as the simplest of flowers but one of the most beautiful too.

The citation above reminds me of the one below:

Song of Solomon 2:1-2 - “I am a rose of Sharon, a lily of the valleys. Like a lily among thorns is my darling among the young women.”

“I am a rose of Sharon…” – such a bodacious, strongly colored flower.

“Like a lily among thorns is my darling among the young women.” – Violet is an older woman. She is looked down upon (a lily of the valleys) and treated with meanness by others just because she is older even though she is a darling.

Said the above, we see in the painting that Violet wears a silver mask. Through the silver mask, she contemplates an hourglass and the sun on the horizon. Both represent the passage of time. Time is inescapable, what matters is what we make of Time.

At first, the picture of the hourglass came to my mind as a reference to one of my previous paintings: “My cup runneth over…”. In that painting the cup is not an hourglass, it is the whole grail. In the painting above the whole grail appears as the hourglass of life and what we choose to drink from it. Coincidently, when I researched the Garden of Hesperides, I found out that in some versions of the myth, the Hesperides are said to be daughters of Atlas. Atlas holds the heavens and Earth from crashing against each other. Coming across that part of the myth, I immediately thought that the hourglass in the painting was a representation of Heaven and Earth encountering each other, not crashing, as immanence and transcendence, eternity and temporality, freedom and constrictions, a loving pairing. This loving pairing is depicted as two breasts rubbing against each other in an interracial libidinous rendezvous, or an act of love between Eve and Lilith in the absence of Adam.

That is the hourglass, the holy grail, a communion chalice. On the horizon, the sun during sunset (as the Hesperides are the sunset goddesses) descends over it as a communion wafer, the bread of life, the body and blood of God. But in this case, it is the body and blood of Violet. She has a decision to make. Is it the sunset of her golden days or the dawn of a new vision? I think I know what answer Violet has chosen.

p.s. The whole background is pink because this is the inner garden of Violet. It happens inside her heart and womb.

The white lines are not painted, they are scratches and scars. They are epistemological slices infringed on Violet’s way of being by the look and judgment of others.

Update: (April.23.2020) – At first I named this painting “The Garden of Hesperides”. However, later, I changed it to “The Seat of Virtue.” The latter title is the English translation of an Asian woman's name with whom I fell in deepest love. She was 46 at the time. She was entering her pre-menopause years. I started painting only because I was in love with this woman. She did not love me even though we had a very strong friendship at the time. I wanted to impress her. That is why a started painting again after so many decades. But, soon enough I found out that she was in love with another man.

I continued painting because it was the only way that was left to express my passion (and desperation) and live out my love for her. Painting became a volcano. In a matter of a few days, I made 10 paintings to celebrate (or digest my love) for her. However, above everything, this painting is about a maturing woman and their choice to press forward, to live the best years of her sexuality. At the same time, it is the picture of a real dilemma lived by every mid-aged woman everywhere. It is an archetype of, hopefully, how to break a stereotype.

Update:  (December.13.2022) – I have been reading a book [Hoss, Robert J. Dream Language: Self-Understanding through Imagery and Color] about the meaning of colors in dreams. According to the author, when a color results from the mixing of another color with white, “white associates a ‘newness, often of a fantasy nature, or a renewal or transformation of the emotion represented by the color with which it combines… mixes, making it less intense and more pleasant and friendly.” So, it makes me believe that using so much pink in my paintings is a way of processing my masculinity seeing that in general manner man’s sexuality tends to be represented as red.