“My Cup Runneth Over”

“Incomprehensible and fathomless Heaven
Wraps up all the earthly profoundness,
Hiding its brightness within Earth's depths;—
All Heaven's intents are dwelling in integrity.”

The diagram in this painting features the balance of dual elements like the caduceus does. However, “My Cup runneth Over” does not have a phallic shape. More than that, “My Cup runneth Over” rejoices and shines on not being phallic. It is based on curves and round shapes. And, the contrary the Caduceus, is a symbol of healing

Two rings are connected in the center of the painting being the very core of the whole arrangement. At the same point in the painting, two half-spheres are joined by the summits of their circumferences. The shapes are feminine and exude a down-to-earth, well-grounded, and receptive feeling.

The joining of the two half-spheres reminds me of Plato’s myth of Androgynous. The halves in the painting form a whole. However, the whole is not an enclosed sphere in itself. It is not a hybrid element like Plato’s Androgynous seems to be. “My Cup runneth Over” is a cup: an open and receptive as a whole. Interestingly enough, the word “receptive” and “recipe” (like in pharmaceutical recipe) are related etymologically.

Similarly to the rod of Asclepius, the cup of Hygeia is also a symbol of healing. The Ancient Greek goddess Hygeia, daughter of Asclepius, was associated with feminine traits of healing: hygiene, cleanliness, sanitation (prevention of sickness), and conservation of good health.

Even though the Caduceus of Hermes is not a symbol of healing, it carries a very rich symbolism and also lends meaning to this painting. Hermes was the patron god of alchemy (also called Hermeticism). One of the goals of alchemists was to transform base metals into precious metals (Gold from lead, for example). However, the esoteric/spiritual/religious aspect of it aimed for the purification of the human spirit.

One of the maxims of Alchemy was:

to that which is Below, to accomplish the miracle of the One Thing."

This is what “My Cup Runneth Over” is all about: the conjoining, the union of two specular elements to form a healing arrangement. By the way, the original meaning of “healing” was “to make whole”.

The elements of healing, sublimation, mutual connection, and even complicity are the very heart of this painting. At first look, it is very obvious that the painting aims for the expression of purity (geometry) and nobleness (gold color), and nurturance (Hygeia’s cup). On the other side, this painting was inspired by a very sexual dream.

In summary, the dream that inspired this painting was about two bi-sexual women. One white, the other brown, lovers, walking around naked in a gleeful rendezvous. At some point in the dream, they kiss an old sickly man soothing the man’s suffering.

But this dream was not just a sexual dream. When I woke up from it, the name “Milk and Honey” came immediately to my mind. The color of their skins and their behavior, in a higher octave, was the promise and enticement of the Land of Honey and Milk as narrated in the Judeo-Christian tradition. They carried the promise of nurturance and redemption by love, be that the love of a woman or the love of God. Therefore, the cup in the painting is not only Hygeia’s cup. It is also King David’s cup (“My cup runneth over”) and Jesus’s grail. Even though King David’s cup and Jesu’s grail images come from religious scriptures both cups were used to drink wine (an inebriating earthly drink). Mary Magdalene was a prostitute like “Milk” and “Honey”, the prostitutes in my dream, and yet, according to the Gospel of John, Mary Magdalene was the first one to be blessed with the vision of Christ's resurrected.

However, even though the remembrance of Mercury, Asclepius, King David, and Jesus permeates this text, the diagram in the painting is exclusively feminine. Or, at least, it is the depiction of the victory of the feminine through overflow, by not being able to be contained, or even not being able (or not willing) to contain itself. The over-position of triangles appears twice in the diagram. Once inside the cup, and a second time floating over the cup. As with every other symbol in the painting, these symbols (the triangles) have different levels of meaning also. Symbolically, a pointing down triangle means “what is below”. A pointing-up triangle means “what is above”. In this painting, they appear twice conjoining inside the wine/medicine and in the skies: “As above, as below.” At the same time, triangles can be usually seen as a metaphor for women’s pubic areas.

“Milk” and “Honey” are two women who are having sex in rebellion against the historic and religious hegemony of men. They are doing it with their bodies (inside the cup: wine, medicine, body fluids) and they are doing it with their spirits (in the skies). The symbol floating in the sky reminds of the Star of David. The Star of David among other things represents Israel (The Land of Milk and Honey). But the star in the sky in the painting chose to be represented as the conjoining of a white triangle representing the “below” (pointing down), and the black triangle representing what is “above” (pointing up). At the same time, the white triangle, in my mind, is a representation of the white dove that appeared during the baptism of Christ in the Bible.

In the first version of this painting that came to my mind right after the dream, the word “Milk” appeared written above the cup, and “Honey” appeared written below the cup. However, as I went working on the drafts, the letter “K” at the end of “Milk” and the letter “Y” at the end of “Honey” decided to stand alone. Eventually, the letter “K” became an “X” over a trace. Ultimately, I figured out by insight, that these letters were a reference to the XY sex-determination system.

Human females have two of the same kind of sex chromosomes (XX). Human males carry two different kinds of sex chromosomes (XY). In the absence of chromosome Y, the fetus becomes a female. The “X” in the painting is a representation of female power and it is a trace of negation of the “stick” (phallic symbol). The “Y” is inverted showing that the masculine chromosome has been toppled over. Another observation above the letter “K” is that its name in written form is “key”. A key is an object used to open imprisoning objects or places without the use of force or violence.

Tiresias, a prophet in Ancient Greece, was called to become a counselor to the god for having lived seven years as a woman. He was turned into a woman by Hera as punishment for striking with a stick a pair of copulating snakes (a stick and two snakes reminds me of the caduceus). Zeus had a question for Tiresias: “Who has more pleasure during sex, a man or a woman?” Zeus specifically consulted Tiresias because, as cited above, Tiresias had experienced sex as both a man and a woman. Tiresias answered: "Of ten parts a man enjoys one only." Supported by this story, it seems that a woman is ten times more powerful than men in the matter of feeling pleasure and enjoying her libido.

As one last observation, the rings are central to the painting not only geometrically but also in meaning. Therefore, the core of the painting is about connection and alliance. An alliance brings separated parts together towards one goal and identity.  In the case of this painting “My Cup runneth Over”, the alliance is between two moons, a crescent moon, and one waning moon. The shape of “My Cup runneth Over” reminds me of Ouroboros, the snake connected to itself that represents eternity through self re-creation. The use of the word re-creation is very fortuitous because reminds me of recreation and calls my attention to the fact that the alliance between the two moons is a re-creation by recreation, pleasure, and joy as the two females in my dream ran around healing people with playfulness and love, passion and compassion.

One of the moons in the alliance presents itself using the symbol of Lilith. Lilith was the first wife of Adam and was made of the same mud he was. She left him when he wanted to dominate her. Lilith in astrology represents the feminine power and sexuality within women. Lilith as a symbol is a specular image of Eve who was created not from the same matter as Adam but from his rib and was expected to be subservient and sexless. In this painting, Lilith and Eve become one in alliance in the shape of Ouroborus, self-completion through recycling and re-creation. The snakes in the caduceus and the rod of Asclepius are not in an alliance. the union between Eve and Lilith is the union between passion and compassion. It is an image of recreation and healing through playfulness, receptivity, and giving in contrast to Michelangelo’s “Creation of Adam”  in which a male touches another with a phallic symbol in a relationship of contrasting power. 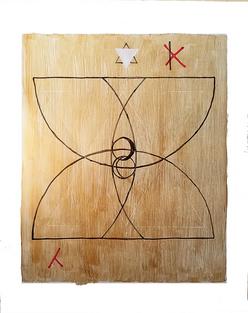