The Stallions of Apollo

​I can’t remember what inspired me to make this painting. One thing I can remember, however, is that a couple of weeks ago I was reading up about the Apollo asteroids.

This painting was horizontal, originally. It was made to depict the Sun scorching the terrains of Mars. I saw horses stampeding, running aimlessly motivated by fear, anger, or confusion. The rectangle is a mesa. Like the mesas in Oklahoma. Oklahoma where the FBI building bombing happened.

Once I went to Oklahoma. I walked to the highest point which is located on a mesa. Arid area. The highest point of Oklahoma is located in a rattlesnake sanctuary. The snakes appear in this painting. They borrow the images of the stallions. The Stallions are represented by golden horseshoes. However, somewhat, they also remind me of genetic material. There is a theme of aridity, overheating, and excess. Most likely, this genetic material is teratological. Horseshoes made of gold are also a symbol of extreme excess even because gold is a weak metal that would make very poor horseshoes.

First of all, the golden symbols are Rahu, Ketu, the alfa, and omega. Rahu and Ketu represent the path of evolution. The alfa and omega are the beginning and end of everything. This “everything” exists as a solid immutable block, but also as cyclical events that the voyage Sun in the sky represents. The Sun is a symbol of power. Life on Earth depends on it. Our solar system revolves around it. However, the Sun itself is not the source of its own power. Its existence is a fruit of a cyclical phenomenon of the Universe. One day the Sun will die. It will die from burning in excess. But the cycles will continue forever. Due to the importance of the cyclical theme, Uroboros appears in the painting as the snake of Oklahoma. It is also an atom orbiting around empty space, and an astronomic body doing the same. In the end, not even the cycles are the paramount power in the Universe. The paramount power is emptiness. It is where everything comes from and where everything goes. 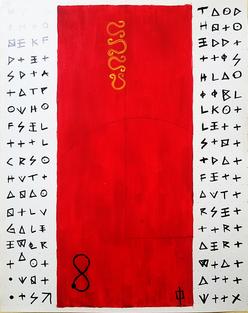